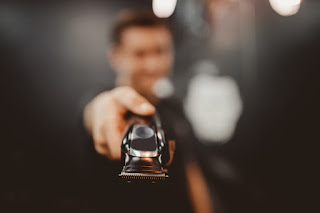 A hair clipper, often individually called the apparent plurale tantum hair clippers (in a similar way to scissors), is a specialised tool used to cut human head hair. Hair clippers work on the same principle as scissors, but are distinct from scissors themselves and razors. Similar but heavier-duty implements are used to shear sheep, but are called handpieces or machine shears.

Electric hair clippers work in a similar way as manual ones, but are driven by an electric motor which makes the blades oscillate from side to side. They have gradually displaced manual hair clippers in many countries. Three different motor types are used in clipper production: magnetic, rotary and pivot. Rotary style may be driven by direct current or alternating current electricity source. Both magnetic and pivot style clippers use magnetic forces derived from winding copper wire around steel. Alternating current creates a cycle attracting and relaxing to a spring to create the speed and torque to drive the clipper cutter across the combing blade.

Leo J. Wahl invented the first electric hair clipper. He first designed a hand-held massager for his uncle, Dr. Frank Wahl. Frank Wahl opened a manufacturing plant in Sterling, Illinois to produce and sell Leo's massager. During this time, Leo would sell massagers to various barbers and noticed an opportunity to improve upon the tools barbers were using at the time.

Leo Wahl took over his uncle's manufacturing business after Frank left to serve in the Spanish–American War in 1898. Leo continued to work on his inventions and by 1921, he patented his final design of an invention more than a decade in the making- the first electric hair clipper. Within a year, Wahl Manufacturing had manufactured and sold thousands of clippers all over the United States and in 1921 Leo renamed the company the Wahl Clipper Corporation. When Leo J. Wahl died on May 20, 1957, he had over 100 patent applications to his name. His descendants still operate the company today.

By 1921, Mathew Andis Sr. entered the electric clipper industry. Production of these clippers began in the basement of his home, with help from Anna, his wife. Andis sold his electric clippers door to door and one year later established the Andis O M Manufacturing with John Oster and Henry Meltzer. After the three men parted ways, Mathew established Andis Clipper Company the following year. Today, Andis Company remains a family-held business. In 1928, the John Oster Manufacturing Company joined the electric clipper market. In 1960, the John Oster Manufacturing Co. was acquired by Sunbeam Corporation. Oster continues to manufacture clippers today. Wahl Clipper Corporation, Andis Company and Oster Company all remain in business today and are highly successful in the clipper industry as are many other companies, such as Kim Laube & Co.