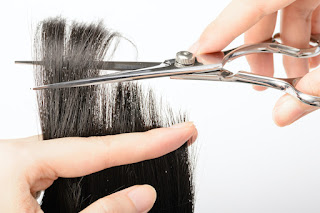 During the First World War, women around the world started to shift to shorter hairstyles that were easier to manage. In the 1920s women started for the first time to bob, shingle and crop their hair, often covering it with small head-hugging cloche hats. In Korea, the bob was called tanbal. Women began marcelling their hair, creating deep waves in it using heated scissor irons. Durable permanent waving became popular also in this period: it was an expensive, uncomfortable and time-consuming process, in which the hair was put in curlers and inserted into a steam or dry heat machine. During the 1930s women began to wear their hair slightly longer, in pageboys, bobs or waves and curls.

During this period, Western men began to wear their hair in ways popularized by movie stars such as Douglas Fairbanks, Jr. and Rudolph Valentino. Men wore their hair short, and either parted on the side or in the middle, or combed straight back, and used pomade, creams and tonics to keep their hair in place. At the beginning of the Second World War and for some time afterwards, men's haircuts grew shorter, mimicking the military crewcut.

During the 1920s and 1930s, Japanese women began wearing their hair in a style called mimi-kakushi (literally, "ear hiding"), in which hair was pulled back to cover the ears and tied into a bun at the nape of the neck. Waved or curled hair became increasingly popular for Japanese women throughout this period, and permanent waves, though controversial, were extremely popular. Bobbed hair also became more popular for Japanese women, mainly among actresses and moga, or "cut-hair girls," young Japanese women who followed Westernized fashions and lifestyles in the 1920s.

After the war, women started to wear their hair in softer, more natural styles. In the early 1950s women's hair was generally curled and worn in a variety of styles and lengths. In the later 1950s, high bouffant and beehive styles, sometimes nicknamed B-52s for their similarity to the bulbous noses of the B-52 Stratofortress bomber, became popular. During this period many women washed and set their hair only once a week, and kept it in place by wearing curlers every night and reteasing and respraying it every morning. In the 1960s, many women began to wear their hair in short modern cuts such as the pixie cut, while in the 1970s, hair tended to be longer and looser. In both the 1960s and 1970s many men and women wore their hair very long and straight. Women straightened their hair through chemical straightening processes, by ironing their hair at home with a clothes iron, or by rolling it up with large empty cans while wet. African-American men and women began wearing their hair naturally (unprocessed) in large Afros, sometimes ornamented with Afro picks made from wood or plastic. By the end of the 1970s the Afro had fallen out of favour among African-Americans, and was being replaced by other natural hairstyles such as corn rows and dreadlocks.